The first two seasons of the hit series Bluey, created by Griffith Film School animation alumni, are going global and will soon screen internationally on Disney Junior and Disney+.

Conceived by Griffith film graduate Joe Brumm, Bluey is the most watched show on ABC iView, with more than 90 million plays.

The team behind Bluey have also partnered with Moose Toys on a global deal that will see a range of merchandise released later this year.

A smash hit with Australian families, Bluey is currently the number one Australian children’s series of 2019. Bluey has also topped the Australian iTunes Kids Chart. Joe Brumm, who worked on BAFTA-award winning kids show Charlie and Lola, created Bluey after watching his daughters at play.

“It’s fascinating seeing how much they learn from devising and playing their own games. Bluey is a celebration of the role imaginative play has in shaping healthy kids,” he said.

As creator and showrunner, Joe wanted to ground the universal themes of family and fun in a recognisably Australian setting.

“We are making this series right here in Brisbane with local animators and actors, so I wanted that reflected on screen- we’ve included Queenslanders, hilly suburban streets, backyard swimming pools,” he said.

Joe graduated in 1998 with a Bachelor of Animation (Honours) and worked in London for a decade before returning home and establishing his own production company, Studio Joho. Ludo’s ethos is simple: ‘create locally, screen globally’. This is evident in the amount of local talent working behind the scenes – including more than 20 Griffith Film School animation graduates.

Daley, who is Executive Producer on Bluey, said the team had done a “fantastic job”.

“Joe and more than 40 Queensland animators, designers, sound and production talent are doing an incredible job,” he said.

“These artists have taken everything beautiful about Brisbane and put it on the screen to make a truly Australian show.”

Griffith Film School Animation Program director Dr Peter Moyes said local graduates made up more than half of the workforce on Bluey.

“Fifty per cent of people employed on this project are new graduates from Griffith Film School,” he said. 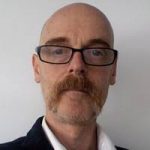 “For a long time there were only a couple of animation studios in Brisbane, but there has been a real upsurge in the industry, with a dedicated children’s channel on the ABC and streaming services like Netflix and Stan.

“The course at GFS attracts people who have a genuine desire to go into this industry, and they are surrounded by other people who feel the same.

“It’s a bonus that people can stay in Brisbane and find meaningful work in the industry.”